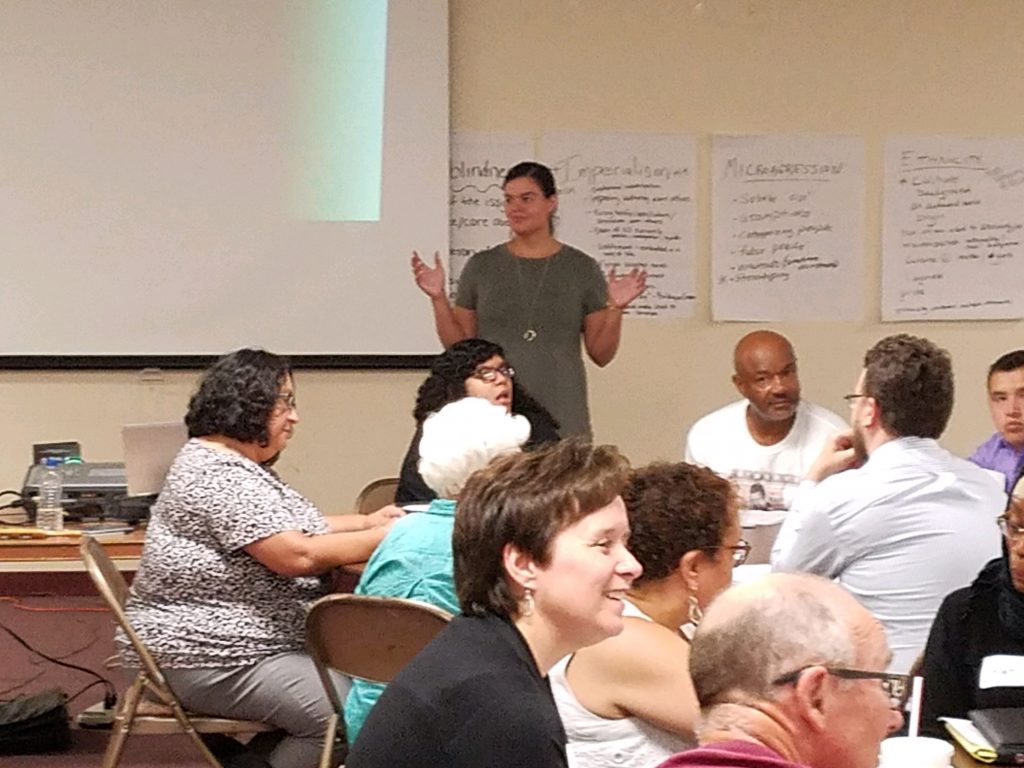 On August 22, 2018, members of Grace Missionary Church in Zion welcomed over 50 participants to the final CommUNITY Dialogue hosted by Zion Township, Illinois Humanities, Coalition for Healthy Communities and Foundation grant recipient YWCA of Lake County. The location for this discussion was fitting as the city of Zion’s founding by Reverend John Alexander Dowie in the late 1800s was built on principles of unification, racial equality and inclusion. Despite his widely criticized leadership, Dowie was ahead of his time when it came to social issues, believing that people of all races could come together and heal as one.

Over a century after Zion’s founding, residents of Lake County are continuing this message of healing on their own terms. Their focus now lies on the healing of community through conversation and awareness. On five separate dates over the summer, residents of Lake County gathered at Grace Missionary Church in Zion for the Love Thy Neighbor summer series. The aim of these dialogues was to facilitate discussions about race, cultural experiences, and takeaways for the community to work towards healing. Throughout these sessions, participants had the chance to explore racial biases, build awareness of their own mindset, and share various community events designed to combat racism.

During the final installment of the series, the theme was unification as a community. In order to improve the society we live in, we must build alliances. The foundation for these alliances lies in intelligent, friendly and open conversation with one another. Marcus Burnett, grandfather of two Waukegan High School students, emphasized this point. “Many of us don’t know how to have dialogue. Or the dialogue we do have is antagonistic. These sessions give us the skills needed to effectively communicate with one another.”

The evening began with an activity called, “How Diverse is Your Community?” where participants were asked to explore and consider the diversity of their circle. The main takeaway from this activity was that that many of our day-to-day social interactions lack in diversity. Claress Pettengill, Director of Resource Development for YWCA of Lake County noted, “We must not only be open to diversity, we must seek out diversity.”

We are a product of our own environment. If the community we live in lacks diversity, it is likely that our social circles will lack in diversity as well. It is important to go out of our way to diversify our circles in order to create alliances with one another. It helps to not only to grow our social circle, but to build understanding of each other and our unique life experiences.
Having friendly conversation with one another fosters understanding and helps us avoid polarizing ourselves from people or groups that we don’t fully understand. Zion resident and chairman of the Lake County chapter of Black Lives Matter, Clyde McClemore, spoke to an increasingly prevalent theme in our society, one that is especially common on social media.

“We see media headlines on certain groups and make automatic assumptions on the characteristics of the people in them. We see groups like Black Lives Matter and We Back the Badge and assume we know everything there is to know about the people in these groups. We assume that they are opposites of one another. Why can’t you support Black Lives and the police at the same time?”

When we polarize ourselves from one another, it only furthers the notion that we are opposites and can’t reach an agreement on any matter. In reality, it’s not that simple. What many people might find through dialogue is that despite our disagreements, there are many matters on which we can agree. The rationality of most people is masked by the outliers shown in the media. Although some people are difficult to reason with, most are willing to step out of their comfort zone in order to have an intelligent discussion.

These systemic issues are the reason why now, more than ever, action must be taken so that our youth can grow up supported by a community that celebrates diversity and fosters inclusion.

· While this is lower than the national average, the difference in poverty rates of municipalities with a higher minority population compared to those with a lower minority population are staggering. In Lake Forest, where minorities make up 10% of the population, the youth poverty rate is 6%. In North Chicago, however, minorities make up 90% of the community, and a staggering 43% of the youth is in poverty.

Living in poverty has a wide range of negative effects on both the physical and mental well-being of children. For this reason, meaningful dialogue on this issue must be translated into action. The city of Zion has made efforts multiple efforts over the summer to raise awareness and facilitate positive change in the community. On June 26, Zion Township hosted a poverty awareness event, giving teens from the Township’s Summer Work Program a chance to reflect on the realities of poverty in everyday life and realize that they can write their own story. This event came in response to a January symposium held by The Lake County Community Foundation that raised awareness about the increasing suburbanization of poverty and called on community leaders to take action. Cheri Neal, the Zion Township Supervisor and organizer of the June event, emphasized the importance of not only raising awareness of these issues, but taking steps towards fixing them.

In the closing moments of the fifth installment of the Love Thy Neighbor series, attendees were invited to share their own events, and sign up for at least one event designed to take action in the fight against racism.

OTHER RESOURCES AND EVENTS

To learn more or contribute to local efforts to address poverty in your community or countywide, visit www.lakecountycf.org or call 847-377-0520.